In recent years, semiconductor packaging has evolved with an increased demand for greater functionality, smaller size, and added utility. A modern PCBA design has two main methods for mounting components onto a PCB: Through-Hole Mounting and Surface Mounting. 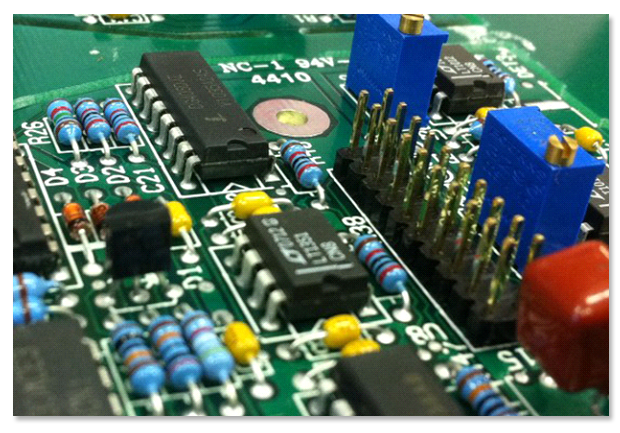 Through-hole mounting is the process by which component leads are placed into drilled holes on a bare PCB. The process was standard practice until the rise of surface mount technology (SMT) in the 1980s, at which time it was expected to completely phase out through-hole. Yet, despite a severe drop in popularity over the years, through-hole technology has proven resilient in the age of SMT, offering a number of advantages and niche applications: namely, reliability.

Through-hole components are best used for high-reliability products that require stronger connections between layers. Whereas SMT components are secured only by solder on the surface of the board, through-hole component leads run through the board, allowing the components to withstand more environmental stress. This is why through-hole technology is commonly used in military and aerospace products that may experience extreme accelerations, collisions, or high temperatures. Through-hole technology is also useful in test and prototyping applications that sometimes require manual adjustments and replacements.

Overall, through-hole’s complete disappearance from PCB assembly is a wide misconception. Barring the above uses for through-hole technology, one should always keep in mind the factors of availability and cost. Not all components are available as SMD packages, and some through-hole components are less expensive.

However, that doesn’t negate that fact that, in a modern assembly facility, through-hole is considered a secondary operation.

Advantages: THM provides stronger mechanical bonds than SMT, making through-hole ideal for components that might undergo mechanical stress, such as connectors or transformers. Good for test and prototyping.

Disadvantages: On the bare PCB side, THM requires the drilling holes, which is expensive and time consuming. THM also limits the available routing area on any multilayer boards, because the drilled holes must pass through all the PCB’s layers. On the assembly side, component placement rates for THM are a fraction of surface mount placement rates, making THM prohibitively expensive. Further, THM requires the use of wave, selective, or hand-soldering techniques, which are much less reliable and repeatable than reflow ovens used for surface mount. Most of all, through-hole technology requires soldering on both sides of the board, as opposed to surface-mounts, which only (for the most part) require attention to one side of the board.

SMT the process by which components are mounted directly onto the surface of the PCB. Known originally as “planar mounting,” the method was developed in the 1960s and has grown increasingly popular since the 1980s. Nowadays, virtually all electronic hardware is manufactured using SMT. It has become essential to PCB design and manufacturing, having improved the quality and performance of PCBs overall, and has reduced the costs of processing and handling greatly.

The key differences between SMT and through-hole mounting are (a) SMT does not require holes to be drilled through a PCB, (b) SMT components are much smaller, and (c) SMT components can be mounted on both side of the board. The ability to fit a high number of small components on a PCB has allowed for much denser, higher performing, and smaller PCBs.

Through-hole component leads, which run through the board and connect a board’s layers, have been replaced by "vias" -- small components which allow a conductive connection between the different layers of a PCB, and which essentially act as through-hole leads. Some surface mount components like BGAs are higher performing components with shorter leads and more interconnection pins that allow for higher speeds.

There are perhaps too many terms that describe different aspects of surface mount technology. Here’s what they mean:

SMT (surface-technology) – the act and method of assembling and mounting electronic technology.

The taxonomy of surface mount devices (SMDs) is so expansive and ever-changing that covering it in full would be impossible. But here are several types that are very common and very important to know.

MELF (Metal Electrode Face Bonded): Consisting of two terminals bonded to a cylindrical body, these SMD components are less expensive than flat chips but require special handing during assembly. Furthermore, one of their biggest disadvantages is their tendency to roll off solder pads during assembly. Generally speaking, they come in the form of diodes, resistors, and capacitors.

SOT Transistors and Diodes: These are usually rectangular and easy to place, though they're a bit outdated. The most common SOTs are SOT 23, SOT 89, SOT 143, and SOT 223. Its most common packaging is tape & reel.

Small outline Integrated Circuit (SOIC) – These are good SMT alternatives to the duel in-line package (DIP), due to their dramatically reduced size. In general, they take up 30 – 50% less space and 70% less thickness than an average DIP.

Quad Flat Pack (QFN) – QFNs are high lead count packages (44 – 304). Its leads are typically gull wing. There are many kinds of QFNs, and they are one of the most common surface-mount ICs.

Plastic Leaded Chip Carrier (PLCC) - Connections are made on all four edges of a square package with a relatively high pin count. PLCCs can have roughly 18 – 100 leads (usually J-leads). Many of them can fit into IC sockets and can be easily replaced in the field. PLCCs have long been a popular option.

Lead-less Chip Carrier (LCC) – Not to be confused with PLCC, LCCs have no leads. Rather, LCCs are soldered directly onto PCBs by their (castellation) solder pads. These are usually designed for Mil Spec because, with no leads to damage, they're quite "rugged." LCCs are great for high temperature and aerospace applications.

Pin Grid Array (PGA) – PGAs are typically square or rectangular, with pins arranged underneath the package. They're design was highly influential on the now ubiquitous BGA.

Flip Chip – Flip chips are bare die packages, with small bottom-side solder bumps that act as leads. They are soldered directly onto the PCB.

Ball Grid Array (BGA) – BGAs are perhaps one of the best performing SMT packages in use today, due to their high densities. The BGA is a descendent of the PGA, yet instead of pins, it has solder balls that can be placed directly onto the PCB. Because of their high density, BGAs are typically used to house microprocessors.

Advantages: SMT allows for smaller PCB size, higher component density, and more real estate to work with. Because fewer drilling holes are required, SMT allows for lower cost and faster production time. During assembly, SMT components can be placed at rates of thousands—even tens of thousands—of placements per hour, versus less than a thousand for THM. Solder joint formation is much more reliable and repeatable using programmed reflow ovens versus through techniques. SMT has proven to be more stable and better performing in shake and vibration conditions.

Disadvantages: SMT can be unreliable when used as the sole attachment method for components subject to mechanical stress (i.e. external devices that are frequently attached or detached).

Overall, surface mounting will almost always prove more efficient and cost-effective than through-hole mounting. It is used in more than 90 percent of PCBAs today. However, special mechanical, electrical, and thermal considerations will continue to require THM, keeping it relevant well into the future.